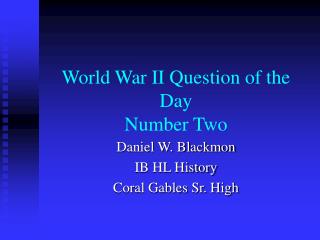 World War II Question of the Day Number Two. Daniel W. Blackmon IB HL History Coral Gables Sr. High. Essay of the Day. Choose TWO battles or campaigns from EITHER the First OR Second World War, and show how they affected the subsequent course and eventual outcome of the war. (1989) (HL). The End of World War Two - After guadalcanal. used