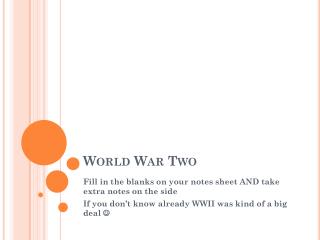 World War Two. Fill in the blanks on your notes sheet AND take extra notes on the side If you don’t know already WWII was kind of a big deal . Who’s Who. Both believed in nationalism and militarism . Germany: Adolph Hitler: National Socialist (Or Nazi) Racial (Aryan Race). Italy: