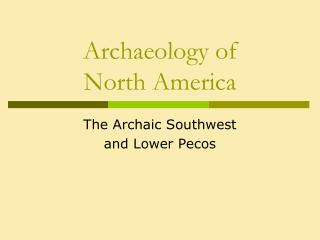 Archaeology of North America. The Archaic Southwest and Lower Pecos. The Southwest Introduction. Includes most of New Mexico and Arizona, southern Utah and Colorado, southeastern California and part of northwest Mexico This region has dramatic environmental contrasts The Historical Geography and Archaeology of the Holy Land - . judah. the shephelah. philistine coastal plain. negev. the

THE SEVENTEENTH AND EARLY EIGHTEENTH CENTURIES - . native americans in pre-columbian north america. between 1 million and

Archaeology - . what is archaeology?. one of 4 sub-fields anthropology study of ancient cultures through material remains

Final Review AP US History - . which of the following sought to exploit the lucrative fur trade in north america?. the

Final Review AP US History - . which of the following sought to exploit the lucrative fur trade in north america?. the

Introduction to Archaeology - . artifacts, ecofacts, fossils, features. artifact - anything made or modified by a human