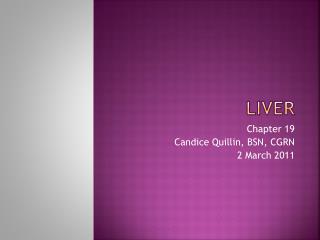 Liver Function Test - . prepared by: siti norhaiza binti hadzir. objectives. by the end of this lecture, students should

HEPATITIS - . new york state office of alcoholism and substance abuse services. workbook prepared by the office of the

Optimal Management of Liver Metastases: Present Results and Future Strategies - Highlights in the management of crc.

LIVER ABSCESS - . occurs when bacteria/protozoa destroy hepatic tissue, produces a cavity which fills up with infective

Cirrhosis of the Liver - . kayla shoaf . objectives . be able to define cirrhosis and the etiology identify symptoms and

Cirrhosis of the Liver - . hepatic cirrhosis. it is a chronic progressive disease characterized by: - replacement of

LIVER - . what is the liver, and what does it do? how a liver become fatty liver stones how the body is affected how