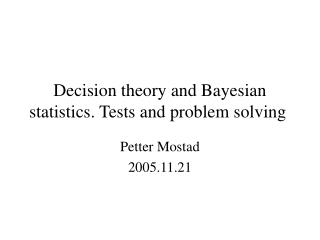 Problem Solving and Decision Making - . problem solving involves making a series of decisions: deciding that something is

CHAPTER 2 PROBLEM SOLVING - . this chapter will cover the following topics: problem solving concepts for the computer

Chapter 6 - . problem solving and algorithm design. chapter goals. determine whether a problem is suitable for a computer

Managing Decision Making and Problem Solving - . learning objectives. after studying this chapter, you should be able to:

Implementing the Problem-Solving/Response to Intervention - . minooka school district 201 response to intervention. if we