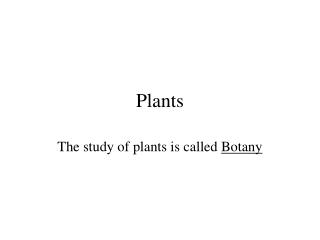 Plants. The study of plants is called Botany. Multicellular eukaryote Produce their own food through photosynthesis Have thick cell walls made of cellulose. Stems & leaves of most have a waxy waterproof coating called a cuticle to prevent water loss. What is a plant?.