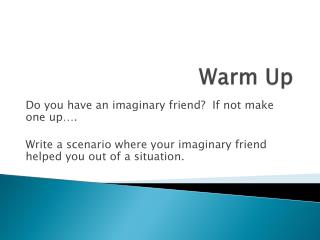 Warm Up. Do you have an imaginary friend? If not make one up…. Write a scenario where your imaginary friend helped you out of a situation. . Cognitive and Emotional Development!. How do we change what we know?. Schema: Conceptual framework a person uses to make sense of the world.