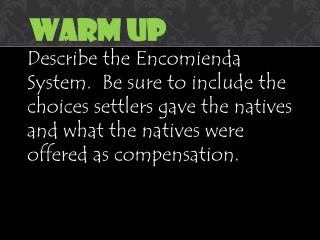 Warm Up. Describe the E ncomienda System. Be sure to include the choices settlers gave the natives and what the natives were offered as compensation. CHAPTER 2 SECTION 5: Beginnings of Slavery in the Americas. Slavery in America (6 minutes).