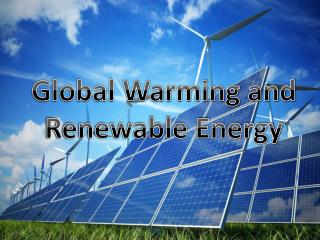 You Can Argue with the Facts: The Denial of Global Warming - Naomi oreskes professor of history and science studies

MAN AND ENERGY A case for Sustainable Living through Renewable and Green Energy - . abstract. energy technologies have a

Global Warming - . so what? . dr. gene fry . october 2014. climate changes without humans. climate has been changing for