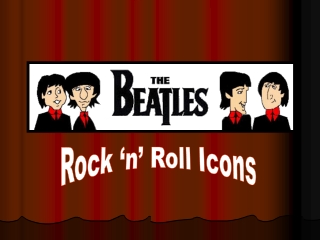 Rock ‘n’ Roll Icons. Beatlemania. It all began… Late 1963 in the United Kingdom Early 1964 in North America …and they never looked back! Video. The history of rock music By James Norton - . in the begining. main influences. the electric guitar – the symbol of

What is Rock n Roll? - . rock 'n' roll swept onto australian shores in 1955 with the release of bill haley's hit song