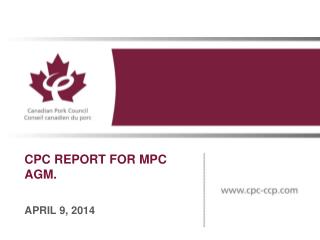 CPC REPORT FOR MPC AGM. APRIL 9, 2014. COOL IS HEATING UP……. - U.S. Court of Appeals in Washington threw out a previous ruling by a three judge panel that ruled against  our legal challenge. Directors Report AGM 2014 - . joe . grad ball 2014 partnership with faculties has allowed us to take the grad ball to the

Presidents Report 2017 AGM - . what does the club have for facilities. we have many new members that may not be aware

Group Development report to AGM - . amandip bisel uk vice-chair group development. what we have been working on….