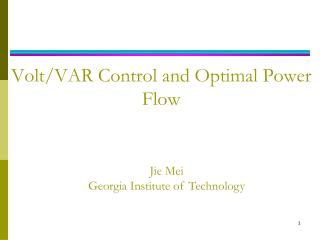 Volt/VAR Control and Optimal Power Flow. Jie Mei Georgia Institute of Technology. The Definition of Power. Define P as real power, which reflects the energy consumption in the network. CHAMP Pain Control - Stacie levine md university of chicago why is this important to teach on the wards? pain is common

Program Control - . ece511: digital system &amp; microprocessor. what we are going to learn in this session:. program

Chapter 12 - . transmission control protocol. objectives. upon completion you will be able to:. be able to name and

Flow control and Error control - . ecs 152a xin liu. based on kurose and ross. our goals: understand principles behind

Electrical Stimulation - . all kinds of choices. stimulating units. fall into one of two categories: low volt (less than