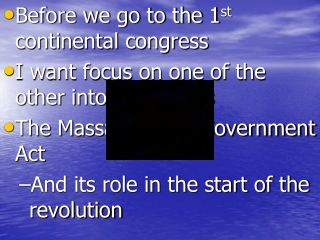 Before we go to the 1 st continental congress I want focus on one of the other intolerable acts The Massachusetts Government Act And its role in the start of the revolution. If we treat American patriots as innocent victims

Congress - . the constitution and the legislative branch of the government. article i describes structure of congress