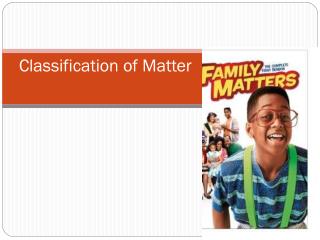 Classification of Matter. Matter. Matter - the “stuff” – solids, liquids, gases, (plasma, and Bose-Einstein condensates) – that compose the universe Matter is anything that has mass and takes up space. Phase Change. Molecules vibrate but can’t change position Retains shape and size.