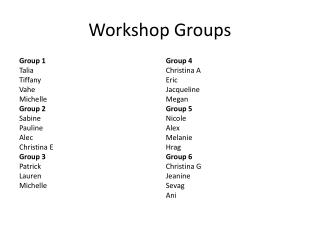 Functional Groups in Organic Compounds (workshop) - . university of lincoln presentation. this work is licensed under a

Workshop 1 – all groups Highlands &amp; Islands Enterprise - . reminder: all discussions will be recorded though

GROUPS - . terms to know. group: two or more people who interact for more than a few moments, feel like a group, and who