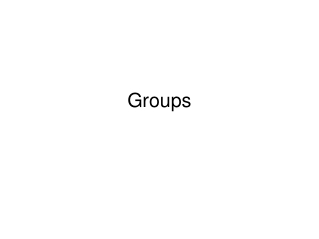 Groups. Primary and Secondary Groups. Groups, Categories, and Aggregates. A group consists of at least two people who share one or more goals and think, feel, and behave in similar ways. Members of a group are in regular contact with one another and take one another’s behavior into account. Groups - . definition two or more individuals, interacting and interdependent, who come together to achieve particular

Interest Groups - . interest groups. “in no country of the world has the principle of association been more

Lobbying: Congress and Interest Groups - . lobbyists who are they?. difficult to define exactly 1 st amendment issues

Chapter 8 Groups and Group Behaviour - . what are the characteristics of groups? do groups have a positive or negative