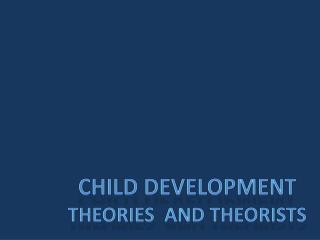 CHILD DEVELOPMENT. THEORIES AND THEORISTS. REVIEW: What is a theory ?. To guide their questions, research, and interpretations of data, developmental scholars construct ‘theories’. A theory is an organized system of principles and explanations for a particular phenomena. . Theories and Theorists - . sociology. lesson outline. what is a theory? sociology’s family tree (theorists) the three

Theories and Theorists - . chapter 1. sociology =. study of groups/societies and the way they affect our behavior. a.

THEORIES AND THEORISTS - Child development. theories and theorists. what is a theory?. to guide their questions,

Contemporary legal theories and theorists - . legal formalism. laws are looked at and treated as if they are science or

Human Relations Theorists and Their Theories (after Hawthorne) - (before beginning, take saq 1(pp. 103-104) and score