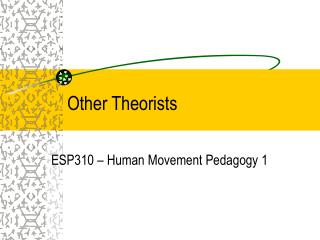 Other Theorists. ESP310 – Human Movement Pedagogy 1. Theorists. Why think about or concern ourselves with educational psychology &/or the theories? Basically because they deal generally with intelligence, ie. our ability to know & reason This underpins teaching & learning.