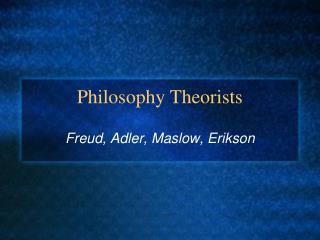 Philosophy Theorists. Freud, Adler, Maslow, Erikson. What is Personality?. the quality or state of being a person. : the complex of characteristics that distinguishes an individual. the totality of an individual's behavioral and emotional characteristics. Nature vs. Nurture.