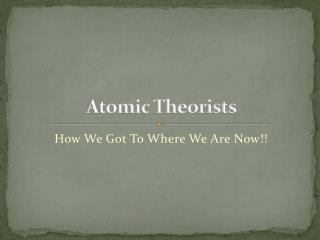 Atomic Theorists. How We Got To Where We Are Now!!. Atomic Theorists At the conclusion of our time together, you should be able to:. List 5 major atomic theorists If possible, give a piece of equipment or experiment for which they are noted Draw their model of the atom