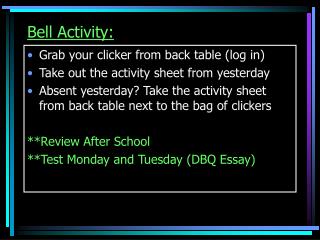 Aug 12 th Bell work/ Warm Up: - . quietly sit in assigned seats. take out your portfolio cover designs from friday and

Transition Activity #1 - . self determination/self advocacy activity: students interview one of the following types of

Unit 1: Colonial America - . bell ringer : why do people move?. compile of list of 5 reasons on your own. now compare

Unit 2 - . bell work. turn in unit 2 preview. what pieces of laboratory equipment are you familiar with? what are they

Scientific Inquiry &amp; Problem Solving - . kimberly davis forensics. bell-ringer activity. pick up one of each of