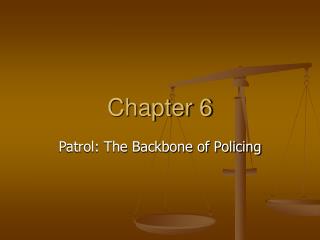 Chapter 6. Patrol: The Backbone of Policing. Patrol can be contributed to each of the common goals of police departments, including preserving the peace, protecting civil rights and civil liberties, enforcing the law, preventing crime, providing services and solving problems.

The Backbone of Biological Molecules - . although cells are 70–95% water, the rest consists mostly of carbon-based

Traffic Shaping and Policing - . objectives. upon completing this module, you will be able to: describe and configure

Chapter 33 The ANIMALS - . this is the big chapter…. overview: life without a backbone. invertebrates are animals that

Bias-Based Policing - Impact on the community. the cost associated with race-related abuses are significant, and include