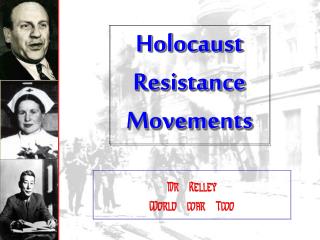 Holocaust Resistance Movements. Mr Kelley World war Two. Essential Question. What were the holocaust resistance movements and to what extent did they help save lives?. Religious Institutions. POPE PIUS XII. Began indifferent and unhelpful towards the Jews The Eight Stages of Genocide and The Nazi Holocaust - . extermination of the jews. the 8 stages of genocide.

The Holocaust - . a teaching resource created by the birmingham holocaust education committee. july 2007

Social Movements of the 1960s - . social movements occur when a large number of people try to change society in some

General topic: how do pathogen/pest populations respond to deployment of host resistance? - . selective effects of

A Brief Guide to Judaism - A curriculum support presentation for the study of the holocaust. created by the birmingham

Extra Ocular Movements - . (aka) …and you thought hyperopia was bad…. what are we going to do t’day?. some ( very,

Unit: The Holocaust Lesson: Oskar Schindler - . ogt social studies at isus there are no grades at isus, so it would be