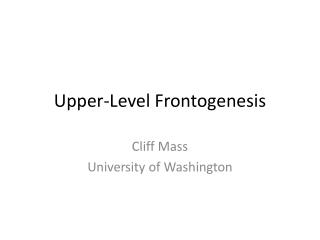 Upper-Level Frontogenesis. Cliff Mass University of Washington. Early Days. In the first half of the 20 th century there was no concept of upper-level fronts. Most studies described a polar front that extended from the surface to the tropopause. Upper-Level Frontogenesis - . cliff mass university of washington. early days. in the first half of the 20 th

Frontogenesis - . frontogenesis: the generation of intensity of a front warm air merged onto colder air

Frontogenesis - . some fronts are very sharp. frontal width. typically most of the temperature drop occurs over

Fronts and Frontogenesis - . what is a front temperature, density, and pressure structure? wind variability across the

The Upper-Level Writing Requirement - . advising, answering student questions, and figuring it out ourselves. today’s

Upper Level Ridge &amp; Breakdown - . this pattern brings the most lightning ignitions to alaska! . l. starts with an

QG Analysis: Upper-Level Systems - . will this upper-level trough intensify or weaken? where will the trough move?. qg

Problem Design for Upper Level Math Courses - . how can we seamlessly integrate a new tech approach to upper level math