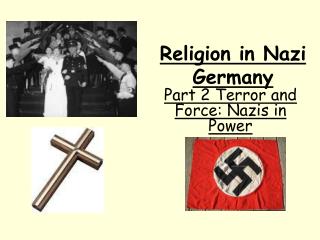 Religion in Nazi Germany. Part 2 Terror and Force: Nazis in Power. What will I learn?. The ways in which Hitler controlled the Church The ways that the Nazi Government controlled the Jewish population. I can…. Summarise the KU and analysis on religion into my essay plan. The Rise of Nazi Germany - . as world war one drew close, germany was on the brink of chaos. under the threat of a

Young People in Nazi Germany - . education in nazi germany. aims : identify how and why the nazis tried to control the

Nazi-ism in Germany - . to learn about nazi-ism in germany to understand the importance of extremist ideologies. similar

IDs and Definitions - . hofbrauhaus mein kampf. questions and imperatives. describe the origins of the nazi party in

Hitler and the Rise of Nazi Germany - . lovingly “borrowed” and edited from a class at cal state fullerton. why the

GERMANY AS A POLICE STATE - . andrea bosio. what was the ss?. private policie and militaries of adolf hitler and the nazi

Rise of Nazi Germany - . how a psycho came to power. a democratic government set up as wwi was ending germans of all

NAZI EDUCATION - . l/o: to describe the importance of education in nazi germany. starter: unscramble these words

Propaganda in Nazi Germany - . blue – what aspect of nazi ideology does the poster link to? red – what does the

Hitler and Nazi Germany - . warmup. http://youtu.be/d0otwfyahyg question: how did hitler and the nazi party get to the

Hitler’s Three Most Important Men - . as leader of nazi germany, adolph hitler had thousands of followers and loyal

Cultural Expression in Nazi Germany - . learning intentions. to understand how art was influenced by historical events in