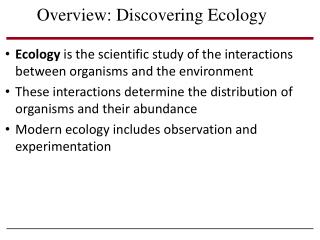 corinthia- net.gr/ecology/axios.htm - Study on the ecological quality of the axios river. www.corinthia-

Ecology - . s4l1. students will describe the roles of organisms and the flow of energy within an ecosystem. a. identify

Ecology Unit - . what is ecology?. ecology- the scientific study of interactions between organisms and their