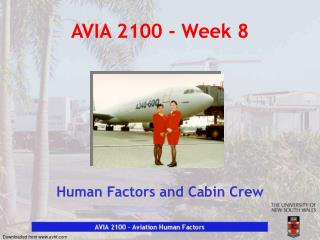 AVIA 2100 - Week 8. Human Factors and Cabin Crew. Cabin crew . Cabin crew are an integral part of the aircraft operating crew Their role is primarily concerned with safety even though service may take up the majority of their time. Cabin crew. Lesson 8 HIS 2100 Rome - . in class exercises first half of class students will work in groups of 3. all students must

Aviation Safety Experts - Who in here wants to fly on cold weather on a plane with no cold weather safety equipment?