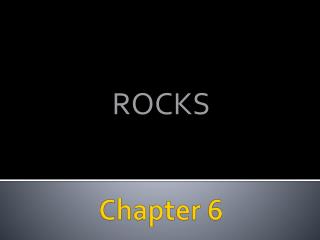 ROCKS. Chapter 6. What is a Rock?. The material that makes up the solid parts of Earth is known as rock . Geologists classify rocks into three major types by the way the rocks form. Igneous Sedimentary Metamorphic. Igneous rock forms when magma, or molten rock, cools and hardens.