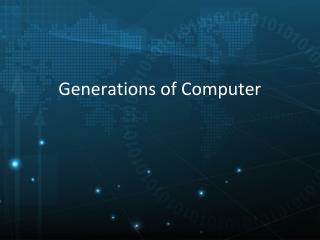 Alternation of Generations - . a type of life cycle found in plants that alternates between 2 different versions of adult

Generations of Ipod - . by: sean caldwell &amp; daren mcneese. classic ipod . the ipod was created by the apple

GENERATIONS OF COMPUTERS - . first generation 1951 - 1959. use of vacuum tubes as a means of storing data in the memory.

GENERATIONS - . presented by brad nesheim brian stuver. a group of people born in the same time frame with common

GENERATIONS - In the workplace. generations. lorelei penera may 10, 2012. agenda. characteristics of generations tips to