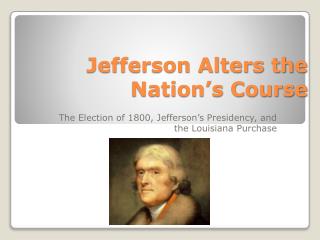 Jefferson Alters the Nation’s Course. The Election of 1800, Jefferson’s Presidency, and the Louisiana Purchase. The presidential election of 1800 was a bitter struggle between Jefferson and Adams. What was the name of the first Secretary of State in Washington’s cabinet? - Complete the final review game companion

The elderly - . aging. aging - the process by which human behavior alters with time wisdom and judgment become more acute

From Boom to Bust: The Roaring 20s and the Great Depression - . americans struggle with post war issues. the 1920s: