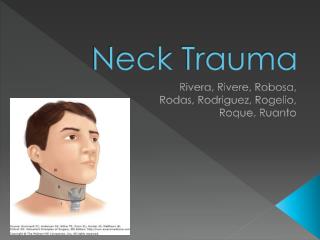 Neck Trauma. Rivera, Rivere , Robosa , Rodas , Rodriguez, Rogelio, Roque , Ruanto. stab wound at the right side of the neck at the level of the cricoid. Background. Few emergencies pose as great a challenge as neck trauma. Neck Trauma - . prepared by dr.hiwa as’ad. introduction . as the incidence of violence rises in the society the rate

Neck Trauma - . objectives . at the conclusion of this presentation the participant will be able to: examine the spectrum

Penetrating Neck Trauma - Nothing begins and nothing ends, that is not paid with moan; for we are born in other’s