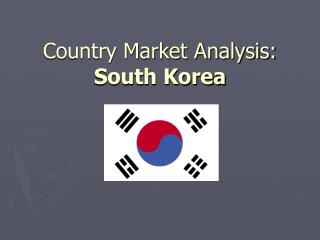 Country Market Analysis: South Korea. FLAG. South Korea. Has been a democracy since 1987 Has a bilateral relationship with the U.S. Considers the U.S. friends, partners, and allies  Great if Lipton decided to import from the U.S. North Korea Vs. South Korea - . where would you like to live?. vs. . north korea. government= communistic dictatorship.