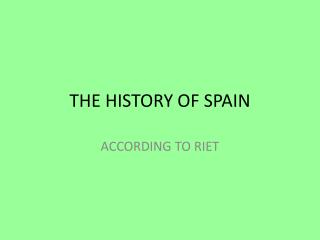 THE HISTORY OF SPAIN. ACCORDING TO RIET. PREHISTORIC. Supposedly, the first tribe of people who lived in what is present day Spain are the Basques ( Vascos ). BILINGUALISM AND DIGLOSSIA IN SPAIN - . defining individual bilingualism. what is bilingualism? definitions: weinreich

Doing Business in Spain - . montreal, 22 nd may 2008. invest in spain: economy, business and advantages for canadian

Spain in the 19th Century - . lo: to explain the important events that occurred in 19th century spain match the important

Age of Exploration - . line of demarcation established in the treaty of tordesillas as a result of the rivalry between

US History Chapter 6 - The origin of american politics 1789-1820. us history chapter 6. problems of the new government.

CATALONIA - . spain. we are more than 7 milion catalans. the capital city is barcelona. catalonia is about 32000 km².