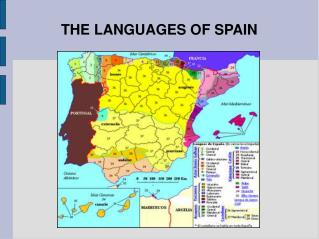 THE LANGUAGES OF SPAIN. In Spain there are four different languages, which are: Castilian Galican Catalan Basque Valencian. WHAT IS AN OFFICIAL LANGUAGE?. An official language is used in governmental events and administrative issues. The Power of Spain - . chapter 18: section 1. main idea. spain experienced a golden age during the 1500s, but economic

The Languages of China - . chapter 1: a language for all of china. abolish the chinese language?. q: qian xuantong, an

The Classification of Languages - . chapter 9. least marked. subject direct object other. most marked. the

The Languages of China - . chapter 1: a language for all of china. abolish the chinese language?. q: qian xuantong, an

The Languages of India - . four language branches, one area of the

The classification of languages - . introduction to linguistics 2. defining language. dialect and language defining

Languages of the World - . language inequality. 5 .6 percent of languages ( 398 languages) are spoken as l1 by