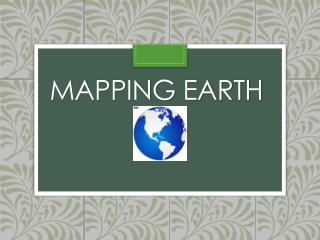 Mapping Earth. Physical maps. Different colors, lines, tints, shading and spot elevations are used to show the elevation and to differentiate lowlands from the mountains Colors are used to distinguish landforms and elevations Mapping the Earth - . using latitude and longitude. relative location : describing the location of a place in relation to

Mapping the Earth - . differentiate between planimetric and hypsometric maps list and recognize the ways in which 3

Mapping the Earth - . why study maps?. why do we need maps? what types of maps are there? how have maps changed?.

Mapping Earth Systems: The Earth is a System of Systems - . don duggan-haas the paleontological research institution and

Coordinate System Unit 1: Mapping the Earth - . this unit is comprised of two main concepts; our coordinate system based

Mapping for Learning: Mapping - . “ a given set of data only acquires significance when we map it onto a pattern of