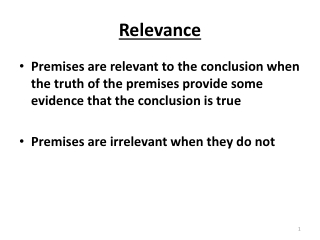 Relevance. Premises are relevant to the conclusion when the truth of the premises provide some evidence that the conclusion is true Premises are irrelevant when they do not. Non Sequitur. Latin for “it does not follow” Irrelevant premises. Exercise 2.6A. 1-10 Do as class. Relevance Feedback - . limitations must yield result within at most 3-4 iterations users will likely terminate the

Cultural Relevance - . week two. food from around the world. before we go over our worksheet, let’s take a look at some