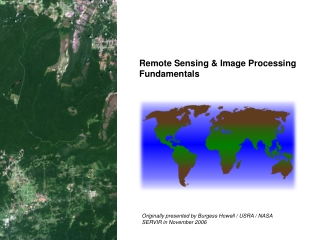 Remote Sensing & Image Processing Fundamentals. Originally presented by Burgess Howell / USRA / NASA SERVIR in November 2006. What is Remote Sensing. Acquisition of information about a target without physical contact with the object. Remote Sensing &amp; Satellite Imagery - . messana science 8. warm up. what is the picture to the right? what do you

A Brief History of Satellite Remote Sensing - . from sputnik to google earth. sputnik . sputnik i launched by the soviet