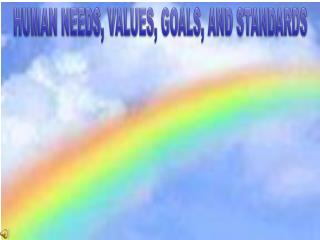 HUMAN NEEDS, VALUES, GOALS, AND STANDARDS. Abraham Maslow. 1908-1970. Abraham Maslow was a psychologist, the title derived from the Latin word “psyche”, meaning mind. A psychologist asks questions and makes observations to determine how a person thinks and how they behave. Goals, Values and Performance - . outline. strategy as a quest for value what is profit? the shareholder value

Goals, Values and Performance - . outline. strategy as a quest for value what is profit? the shareholder value approach

Learning Goals and Standards - . common core for parents. what is common core?. a single set of educational standards for