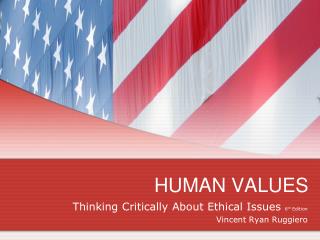 HUMAN VALUES. Thinking Critically About Ethical Issues 6 th Edition Vincent Ryan Ruggiero. The Need for Ethics Chapter One. Ethics is the study of choices people make regarding right and wrong . Each of us make dozens of moral choices daily: Go to school or to work or play sick. Human Values and Environmental Problems - . i=pat activity. we will getting into 5 groups. in your assigned group,

UNIT9: WORLD VIEWS AND HUMAN VALUES - The scientific revolution and the rise of a mechanistic world view . the first

Welcome to session on HUMAN VALUES - . meaning of values. values are the basis of human personality and are very