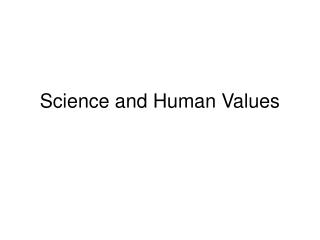 Science and Human Values. Is science value-free?. The ideal of value-freedom in science (cf. Max Weber). Scientists’ subjective valuations must not be allowed to influence scientific theory-choice or the way evidence supports or refutes theories.

Science and Values - . according to weber ancient judaism . a) is at the root of the western sense of “rationality”

Human Values and Environmental Problems - . i=pat activity. we will getting into 5 groups. in your assigned group,

UNIT9: WORLD VIEWS AND HUMAN VALUES - The scientific revolution and the rise of a mechanistic world view . the first