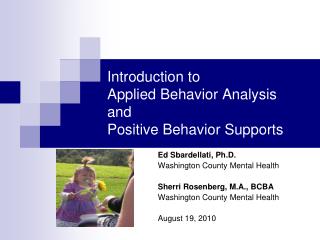 Principles of Learning - . how do parents and other influential adults consciously try to shape children’s behavior and

Psychology is the scientific study of - . a) behavior b) the psyche c) sex &amp; aggression d) mental processes a)

The Evolution of Positive Behavior Support in Our Society: A Functional Analysis - . anthony biglan senior scientist,