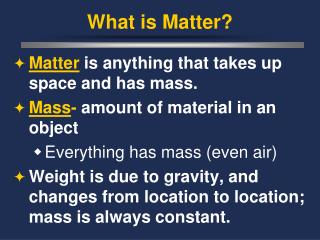 What is Matter?. Matter is anything that takes up space and has mass. Mass - amount of material in an object Everything has mass (even air) Weight is due to gravity, and changes from location to location; mass is always constant. Kinetic Molecular Theory. KMT