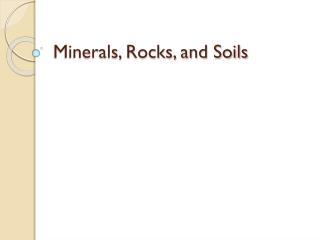 Minerals, Rocks, and Soils. What is a rock? Why is gold so expensive compared to iron? Why do plants grow in some areas but not others?. Activity. With a partner, examine the items given to you. Decide how you might classify the items. Unit 2- Minerals, Rocks, Soils and Weathering - . identifying minerals. how are minerals identified?. minerals can be

Rocks and Soils - . rock types. the earth’s crust has many different types of rocks. these rocks are usually

ROCKS AND SOILS - . my rocks and where they are from. these rocks are from swithland woods and new zealand. how they

Soils and Minerals - Unit 5. soils and minerals. what is soil?. relatively thin surface layer of the earth’s crust

Rocks and Minerals - . practice test ( powerpoint ) please use corresponding a nswer sheet. slides are automatic- do not

Rocks and Minerals - . stephanie g. olivine is rare. rare and common. quartz are common. platinum, silver and gold are

Rocks and Minerals - . junior science. rocks and minerals. rocks may not be alive, but they can still tell us quite a lot

Rocks and Minerals - . elements, compounds and mixtures. matter is anything that takes up space and has mass. all

Minerals and Rocks - Chapter 2. minerals and rocks. earth materials – minerals. some minerals, such as gold,