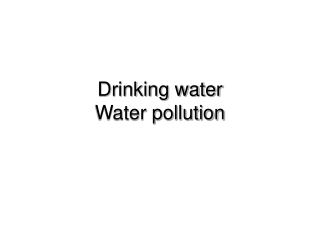 Drinking water Water pollution. Water is H 2 O. Water. is a tasteless, odourless, appearing colourless for naked eye substance that is essential to all known forms of life. is a universal solvent . WATER POLLUTION - . by sarah fluney. what is water

Water Pollution - . water pollution can come from a number of different sources. if the pollution comes from a single

Water Pollution - . the problem. humans use water bodies as an easy way to get rid of waste. what happens to waste in

Water Pollution - . introduction. did you know that the water we use today is the same water the dinosaurs used? we

Water Pollution - . rapid growth of human pop. and industrial output has resulted in declines in water quality waters are