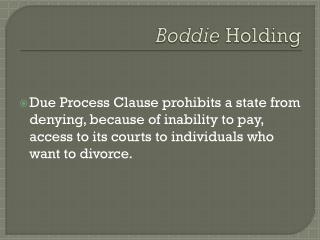 Boddie Holding. Due Process Clause prohibits a state from denying, because of inability to pay, access to its courts to individuals who want to divorce. . Historical Context. Grew out of Griffin v. Illinois , a criminal case decided nearly 30 years before Boddie Ajeets Holding - Ajeets is a professional hr, recruiting and manpower placement company that provides all types of