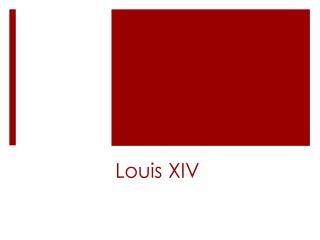 Louis XIV. Death of the Sun King. Louis XIV dies in 1715. The government coffers (treasury or money that the government has) were depleted by Louis XIV. The death of Louis XIV brought about Louis XV. Louis XV is a lot like Louis XIV, and really does not change the way he governs France. Louis XIV - . french monarch chapter 5 section 2. goals and objectives. upon completion students should be able to: 1.

Louis XIV - . the ultimate absolute ruler. all others were wannabes. henry iv and sully middle class = civil servants to

Louis XIV - . absolute monarch of france. rise to power. louis xiv came to the throne in 1643 at the age of four gained

Louis XIV - . major accomplishes. ascended to the throne after his fifth birthday and ruled for 72 years longest reign of

Absolutism Louis XIV - . one king, one law, one faith the divine right of kings bousset. cardinal’s richelieu and

Absolutism and Louis XIV - . absolutism. - political belief that one ruler should hold all of the power within the

His Royal Highness, King Louis XIV and XVI - . how their actions helped fuel the revolution. louis xiv – the sun king.