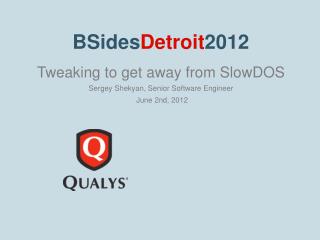 BSides Detroit 2012. Tweaking to get away from SlowDOS Sergey Shekyan, Senior Software Engineer June 2nd, 2012. Denial of Service Attacks. BSIDES DETROIT 2012. 2. Types of attack. There is a variety of forms aiming at a variety of services: