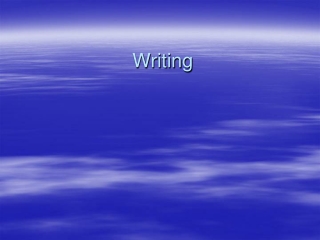 Writing. “Some are born writers. Some achieve writing. Some have writing thrust upon them.” Shakespeare. The conscious to the unconscious mind. Plato’s chariot. intervals Ascend to the abstract. know your audience!. Readers like to be taught and entertained. know their location.

writing - . planning. discussion. discuss in groups of four what li daiyu and liu qian saw and heard during their travel

Writing - . how can you make your writing great? use the elements of the 6+1 writing

WRITING - . a business plan. to write a plan, one should:. think clearly plan carefully answer the following

writing - Involve your audience by speaking to them directly using personal pronouns and shared experiences. questions to

Writing! - . 5 steps of writing. step #1: planning. sometimes called prewriting, this is the stuff we do before writing.

Writing - . ghswt. what is the ghsgwt. persuasive writing given in the fall of junior year 100 minutes of student

writing - . lecturer:. how can we write a good article?. theme: 2. writing skills:. an article that appeals to

writing - Involve your audience by speaking to them directly using personal pronouns and shared experiences. questions

WRITING - . study the chart carefully the write a paragraph of 100-120 words, describing the information in the chart.

Writing - Unit 2 king. writing. how to write a play. reading task. 1 read or listen to the final part of the play in