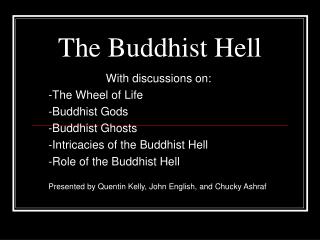 The Buddhist Hell - . with discussions on: -the wheel of life -buddhist gods -buddhist ghosts -intricacies of the

The Buddhist monks - . by jayden greig. what belief system/philosophy/background underpins the lifestyle of this

HOW THe HELL - . i know what your thinking. how the hell do i do this? if you follow my directions and do your part by

Hell - . why talk about it in a ‘reasonable’