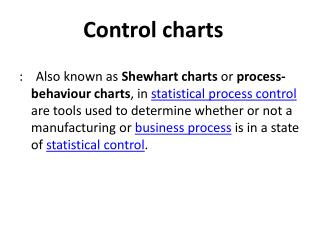 Control charts : A lso known as Shewhart charts or process- behaviour charts , in statistical process control are tools used to determine whether or not a manufacturing or business process is in a state of statistical control. Pedigree Charts - . the family tree of genetics. what is a pedigree?. a pedigree is a chart of the genetic history of

Chapter 6 Control Charts for Attributes - . introduction. it is not always possible or practical to use measurement data